The normal responsibility of the manufacturer is to ensure that the product is safe and meets quality standards, and to pay taxes. Extended Producer Responsibility (EPR) is when manufacturers also take care of recycling or disposal of their products after consumption.

As a rule, the EPR strategy is adopted by governments, due to which it becomes mandatory for implementation in the respective countries. The RVI strategy sets itself several main tasks. Firstly, it promotes the eco-design of products. That is, the manufacturer creates those products that will later be easier to dispose of, reuse and recycle. Consequently, there is less waste and negative impact on the environment. 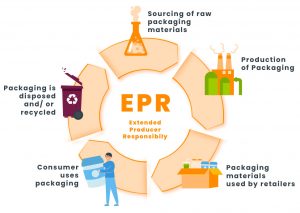 Second, the EPR producer encourages consumers to sort waste to facilitate recycling. Thirdly, the goal of the EPR policy is not just to dispose of waste, but to create new recycling methods and distribute them in society. In addition, the EPR raises the level of education and awareness of the population in environmental issues.

The basic principle of EPR policy is the same in most countries. The manufacturer or importer pays a fee for the disposal of the packaging of their goods to the state or an authorized EPR operator. In most countries of the European Union, there are special producer responsibility organizations – PRO (Producer Responsibility Organization). Such organizations collect funds from manufacturers of packaged products and direct them to recycling and waste disposal. By the way, a similar organization, Ukrekoresursy, also operated in Ukraine. It was created in 2001, but in 2015 it was liquidated due to the fact that the company used corruption schemes in the field of waste processing – Ukrecoresursy collected funds from enterprises, but did not carry out recycling. Therefore, many business associations filed complaints against the activities of the organization.

Exceptions to the EPR policy are certain types of packaging materials from which industrial or transport packages are made. Their supplier takes them back immediately when they transfer the product to the consumer. 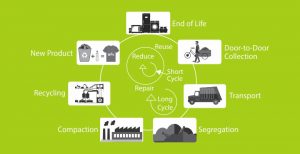 In the European Union, the EPR strategy covers the recycling of batteries, accumulators, vehicles. The system for the production of packaging for products also operates according to the principle of ROP. Thus, in the EU Member States, manufacturers must ensure the environmental collection and recycling of used packaging. Manufacturers in the European Union are responsible for the disposal of tires, used grease, paper, and construction waste. In some EU countries, agricultural plastics, medicines and medical waste, plastic bags, photographic chemicals and chemicals, pesticides, lamps, light bulbs and fittings are subject to EPR.

Some of the first countries to adopt extended producer responsibility policies were Germany and Sweden, back in the 1990s. Currently, 26 of the 27 EU members have joined the EPR strategy. The last country that has not yet fully joined the strategy is Poland. However, it is also gradually implementing the RBA, as EU law requires all Member States to fully implement this policy.