Manufacturers can independently collect and process the waste left by their products (the so-called end of life-cycle management or management of the end of the product life cycle). However, in Europe, manufacturers most often delegate this function to separate organizations that perform it professionally for many manufacturers.

One of PRO’s tasks is to create a monitoring system to keep track of the number of packages that have entered the market, which are subsequently collected and processed. 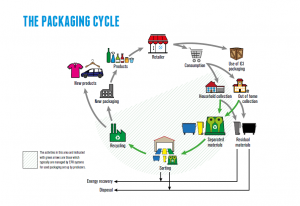 Funded by PROs through fees from manufacturers or membership dues from industry associations. Governments only grant appropriate licenses to organizations that have sufficient financial resources to carry out their functions.

PROs cooperate with local authorities. In some EU countries, PROs have both financial and organizational responsibility for waste recycling, in others they are mainly organizational and only partly financial.

Below, we consider a few examples of countries that have taken a responsible approach to solving the problem of waste.

Until 1990, waste in Germany was a major problem. Many landfills were completely overflowing, and there were not enough incinerators to process the country’s household waste. About half of the waste in landfills was from product packaging.

To solve this problem, in 1991 the government approved the Packaging Ordinance. It was the first piece of legislation in the world to incorporate the concept of RBA. The regulation required manufacturers and distributors to take back, reuse or recycle packaging. Anyone who did not return the packaging to their store or recycle it was forced to pay a recycling fee. This contribution was included in the price of the goods and thus reduced its competitiveness.

The latest EPR policy change in Germany took place in January 2019, when the new Packaging Law, Verpackungsgesetz, came into force. Until that moment, Germany had a single non-profit Producer Responsibility Organization (PRO). Now there are several commercial PROs in the country competing with each other. PROs are financed by companies that have joined the central registry, have a special Green Dot license and pay the appropriate fees. The financial contribution of producers and importers to the system depends on the amount of packaging they “bring” to the German market.

Now Germany is in second place in terms of recycling of all waste after Austria – 62% of waste is recycled in Germany (63% in Austria), and the share of plastic recycling is just under 50%. All costs associated with the collection, sorting and recycling of packaging waste are covered by the fee paid by the companies. PROs administer these fees and contract with recycling companies and municipalities.

Another significant change that was introduced in Germany in the early 2000s was the deposit refund system for beverage containers. This system has evolved rapidly over the past two decades and is now part of the Packaging Law. 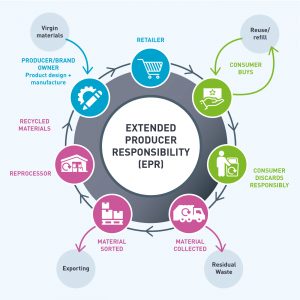 The Czech Republic became the first Eastern European country to implement the EPR concept. About 16% of all waste is recycled in the Czech Republic. At the same time, the recycling of plastic packaging is one of the highest in the EU – almost 60%. Thanks to its transparent and efficient system, the country ranks among the best in the EU both in terms of recycling packaging waste and in terms of financial costs of sorting and recycling per inhabitant per year.

In the Czech Republic, EKO-KOM recycles over 80% of waste. EKO-KOM has an established partnership with 6 thousand municipalities, where 99% of citizens live. Founded EKO-KOM industries for the processing of household and industrial packaging.

The share of recycling of all waste in Spain is 33%, and plastic packaging is about the same as in Germany – almost 50%. The Spanish PRO is called Ecoembes. It was founded in 1996 as a non-profit organization by companies involved in packaging and the production and distribution of packaging. Ecoembes is primarily responsible for financing, while municipalities are responsible for organizing waste management.

Ecoembes fund various related businesses by paying fees in proportion to the number of packages released to the market. After that, these funds go to local and regional governments to cover additional costs for the collection of light packaging, as well as paper waste.

Belgium has one of the highest share and recycled waste in the EU – 58%. About 45% of plastic is recycled there.